Day in the City 15th Feb

On Monday 15th Craig had a medical appt in the city so I went with him and we had a lovely day including a yummy lunch!

When we left home and when we got into the city it was pouring with rain but by the time we came out from the appt the sun was shining and it was a glorious day on the harbour. We went down to Circular Quay and walked around the Opera house and had a look inside, something we haven't really done for years. No matter how many times we come to the harbour, it is still lovely to just sit and watch the ferries go by and enjoy the views. 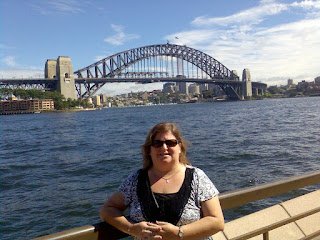 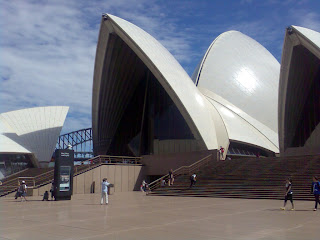 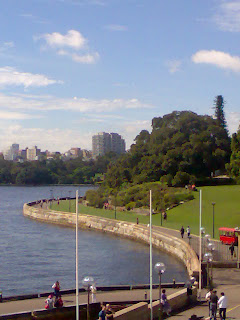 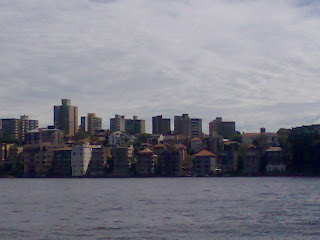 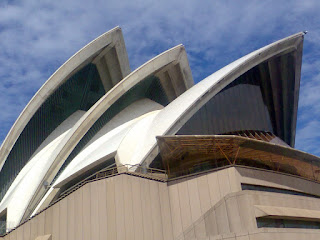 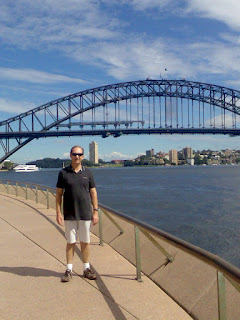 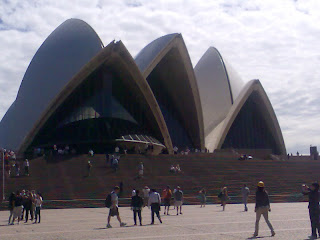 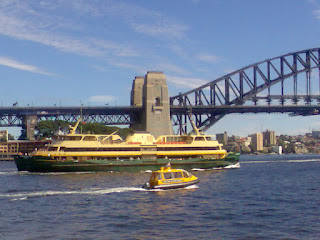 When when we walked up the street to the hotel for lunch we came across this cute little street tucked in between all the modern high rise buildings. A little gem I have never noticed before! 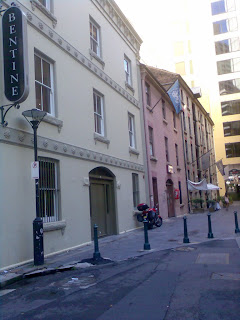 We went to the Mariott for a superb buffet lunch. Lucky we didn't drive our car, don't think the X-trail would have been allowed here with the luxury cars!! 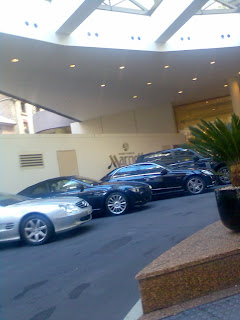 This was plate number one of food, just a little bit of everything to taste it all LOL. All the food was absolutely divine, excellent quality and well............just really yummy!! 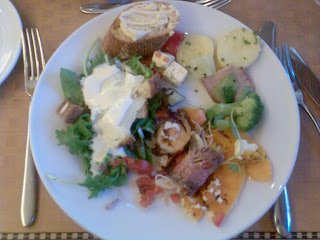 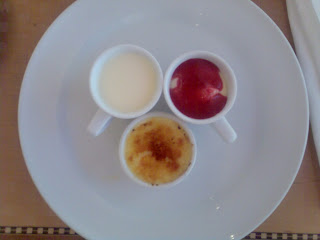 Looking down into the foyer I was showing Craig the brilliant quilting block design in the marble floor!! 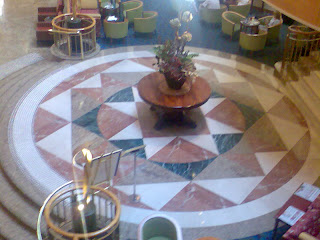 So that was our great day out. My birthday was actually Tuesday 16th and unfortunately I had to work, but my work colleague and I went out for lunch as well LOL

I will be back with more photos of all the gorgeous fabric I received for my birthday.

Yay - finally got some pics to load!

As many as you already know I had a birthday last week. I had lots of birthday lunches which was really nice.

On Sunday 14th we went out for lunch with family and friends to a yummy Italian restaurant. Here is a pic of my great friend Cathy and me. 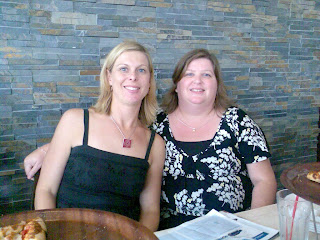 The restaurant had balls of pizza dough ad rolling pins for the kids to play with to keep them entertained. It certainly helped keep Cathy's 3 kids amused!! 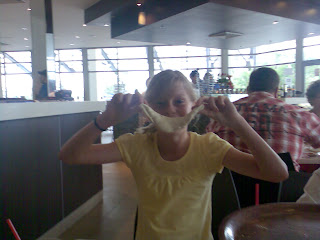 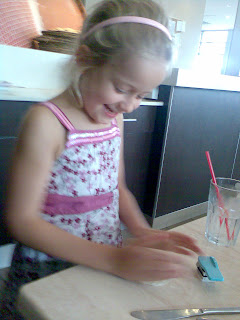 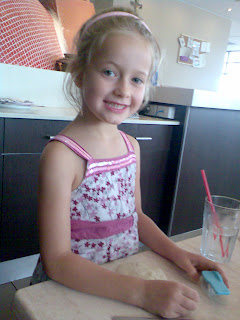 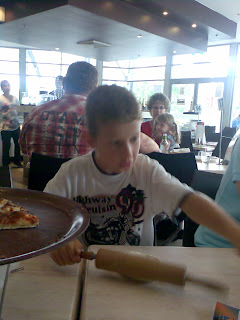 I have so many pics and things to show you all but I can't get blogger to work!! IF I can sign in I can't seem to upload any photos. I am thinking it is our slow connection and the only time I have been able to get on the computer 2 other laptops are hooked onto the internet!
So for now..just a hello from me!!
Posted by Anita at 10:08 PM 3 comments:

Yes, well some of you know I have this thing about Linen.
Well after reading Jodie's post, I was very jealous that her Lincraft had some nice linen and even better at such a great price.
My local Lincraft is pretty hopeless when it comes to fabric choices, the only thing they have a great range of is scrapbooking supplies.......of which I am not into!!
So........anyway........back to the story.......I decided to go check out Lincraft again.....hoping that maybe.......just mabye they might have something nice.
Well lo and behold that had this lovely linen, all in pretty colours for like $6.50 a metre!! Well one could not let that go by could one!!
The problem was which colours to choose!! I had to stick to 4 different rolls as that is all I could carry.........as in usual Lincraft style........they have a sale on............and they have 1 counter open!! And of course that counter is right at the front of the store.....waaaaay away from the fabric section!!
But that is OK, I will put up with a sore arm for linen at that price LOL

Now you must go look at the fabric this girl has - absolutely gorgeous!!!
http://www.etsy.com/shop/UniqueShiny?section_id=6489562

Ok, going back to my stitching, keeps my eyes away from the computer when quiet at work LOL
Posted by Anita at 2:40 PM 3 comments:

Gee I am a bad blogger, been so slack with putting anything on here!! Guess my life is pretty boring at times LOL
But here are some things that I have been working on. This is Block 1 of the Patchwork Village by Rosalie Quinlan. Her quilt is done in pinks and reds but I am trying to use up some of my stash so I am digging into my crate full of greens/mustards/burgandy and tans. 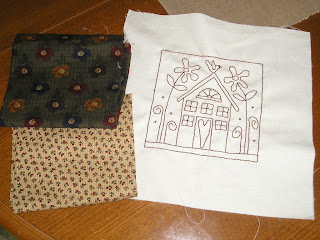 I am also trying to finish this stitchery from the retreat in Nundle last March. This is to make a bucket shaped stitching bag. Well I am trying to get it finished to take to Nundle this year (5 weeks away) just to show that I have finished something from the last 2 years retreats!! LOL
It had been so long since I had picked it up that the tracing had all faded and I had to retrace half of it again! But thanks to Peg, I have found a great new pen for doing the stitcheries, am finding it easier to see and it doesn't fade!! Thanks Peg!! 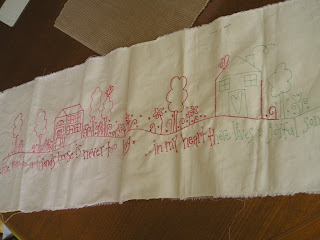 I have also discovered The Book Depository - what a great site! Just search for any books, much cheaper than anywhere else and the postage is free!! Can't get any better than that! So have stocked up on some reading, including some great quilty novels. 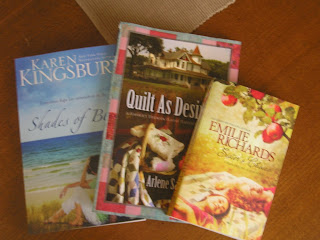 So that is what I have been up to lately. Have also changed my work days around so I have Mondays off instead of Tuesday. It is working out much better and am coping better with work and the work at home.

TAFE starts back next week for Tim so life will get a bit busier as he still doesn't have his license and we have to take him to and from TAFE 2 nights a week. He is doing well at his Personal Fitness course and is looking forward to getting back into it again.

Nathan has continued his uni subjects over the break and just found out he got a Distinction for his last subject so he was very happy about that and it has kept him motivated.

In two weeks time Craig goes on another 5 weeks leave from work. Unfortunately he has no say in when he takes holidays so as we only had holidays in November, I won't be able to take any time off. So he is going to do some painting at home, which is way overdue! And we will just have some long weekend breaks.

So how's that for a newsy post!! Makes up for the lack of posting LOL

Join us at Creating Really Amazing Friends Together for plenty of crafting and other chatting!!!

Visits from my friends

The Weather at My Place